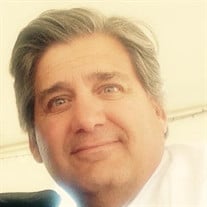 On Saturday, November 20,2021, Joseph “Joe” Santos with his devout relationship with God had reached its culmination, when the Lord welcomed him home in a peaceful manner as he slept in the comfort of his own bed. Joe was a gentle, loving, and caring man. His witty sense of humor and joyful outlook on life will leave a permanent mark in our hearts as he will be deeply missed forever. Joe’s family was the essence of his life. He was honored to be the Patriarch, Father, Grandfather, (AKA: Voo-voo) to his family. Joe leaves behind his wife and best friend of 38 years, Mani, his son Justin, daughter Cory, daughter-in-law Tara, and granddaughter, Tessa. Joe had a passion for his family, music, weight training, and all New England Area sports teams. No one will ever forget his love and loyalty for the New England Patriots. As a major presence in the lives of his children, Justin and Cory fondly remember their Father as a supportive and dependable role model who helped shape them into the wonderful people they are today. Upon graduating high school, he joined the United States Marine Corps. During his 22-year career as a Military Policeman, he rose to the rank of Master Sergeant and earned his AA degree. His career took him to posts and assignments in numerous states as well as foreign bases including Okinawa, Somalia, Mogadishu, Philippines, and Croatia. He loved his tour as a Drill Instructor at MCRD, San Diego. His proudest USMC achievements were being a member of the Hawaii Marksmanship Team and his completion of FBI Sniper School and Swat School Training. Joe retired in January 2002 from his final duty station of Camp Pendleton, CA where he was so proud to have served in every major command aboard the base. In March 2002, Joe began his second career of almost 20 years as a member of the Transportation Security Administration under the Department of Homeland Security. He began on the Mobile Screening Force which implemented and developed screening policies at multiple airports across the country. Later that year, Joe was permanently assigned to the San Diego airport where he was deservedly promoted to Manager. Throughout his tenure with TSA, Joe held a multitude of leadership positions including overseeing the daily operations of the Behavior Detection Program. Above all else, Joe wanted to ensure that his officers were always cared for and treated with courtesy and respect. Joe was a “people first” and “agency second” kind of guy who would defend his officers and help guide them through whatever challenges came their way. His years of dedication and service to TSA San Diego will have a lasting impact on all those he’s had the privilege to lead. Joe is predeceased by his parents, Manuel and Belmira Santos of West Warwick, RI. He is survived by his brothers: Richard and wife Barbara, Jimmy and wife Kathy, Robert and wife Tracy of Rhode Island and his sister, Mary Jane of Georgia. He will be sadly missed by his many nieces, nephews, extended family and good friends. Joe will be forever remembered for his beautiful smile, gentle green eyes, caring heart, loving embrace and unconditional love. Although our hearts are heavy, we will celebrate his life and find comfort that he is in heaven watching over us. There will be a graveside service on Tuesday, December 21st at 9:30 A.M. at Miramar National Cemetery, 5795 Nobel Drive, San Diego, CA 92122. Masks will be required due to Covid-19 protocols. In lieu of flowers, the family would prefer donations to the Veteran’s Village of San Diego. Link: https://vvsd.net/donate/

On Saturday, November 20,2021, Joseph &#8220;Joe&#8221; Santos with his devout relationship with God had reached its culmination, when the Lord welcomed him home in a peaceful manner as he slept in the comfort of his own bed. Joe was a gentle,... View Obituary & Service Information

The family of MSgt. Joseph Anthony Santos, USMC - Retired created this Life Tributes page to make it easy to share your memories.

A comforting word from you means a lot.