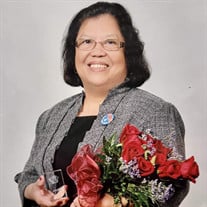 Gloria Pagulayan Arado, a loving wife, mother, and grandmother passed away on February 10, 2022 at 74 years old. Gloria was born in Manila, Philippines on December 23, 1947 as an only child to Orlando Pagulayan and Guadalupe Agawin. Gloria is survived by her 2 children: Oliver Jason and Lindsey Marie, and 3 grandchildren: Cory, Caleb, and Ariyani. She is reunited in Heaven with her husband Virgil, eldest daughter Andrea Marie, and mother Guadalupe. Gloria enjoyed building a life living her American dreams. She immediately immigrated to the States in 1971 after graduating from the University of Santo Tomas for her BA in Medical Technology. While pioneering her way through nursing school in Southern Illinois alone she built lifelong friendships while working at the local hospitals, and traveling her new home making memories. She married the love of her life, Virgil Arado on Sept. 1973 and were happily married for 47 beautiful years. Soon after, they began to make their mark on the world and together sponsored relatives to immigrate. They created a family and took advantage of every opportunity. She served in the Army Reserves for many years as a Registered Nurse until her honorable discharge in 2003. In 1997 Gloria and Virgil made the decision to move to California and be closer to family. The city of Escondido became their home for over 20 years, where she became an active parishioner of St. Mary’s Catholic Church . She is a prominent leader of multiple organizations like Lay Carmelite Community of Mary, Filipino American Community of St. Mary’s Church, and EMASS just to name a few. Gloria is a devote Catholic who always served Our Lord Jesus Christ in every way possible. After her retirement from her career as an RN of 44 years, she really had a passion to help others through attending all the Church events, retreats, and volunteer work. Gloria had a complicated health journey especially later in life with CKD III and diabetes. However her health never stopped her from doing all her favorite activities like succulent gardening, mahjong/penny slots, traveling, and watching her GSW basketball. But her grandchildren were her pride and joy who gave her the most fulfillment. She kept her faith throughout every hardship and prayed fervently. Gloria’s legacy and memory will live on with us forever.

Gloria Pagulayan Arado, a loving wife, mother, and grandmother passed away on February 10, 2022 at 74 years old. Gloria was born in Manila, Philippines on December 23, 1947 as an only child to Orlando Pagulayan and Guadalupe Agawin. Gloria is... View Obituary & Service Information

The family of Gloria Arado created this Life Tributes page to make it easy to share your memories.

A comforting word from you means a lot.

Send flowers to the Arado family.